I have been touring all over Britain & France for my entire career - over 35 years. Today i just focus on tours through England & Wales as well as France - especially Normandy & The D Day Landings of June 1944. I speak pretty fluent French, although I don't and won't guide in French.

One of the best ways to experience Britain outside London is to stay overnight in some of the historic towns and cities and smaller villages.

For example, if you stay in Bath(120 miles west of London) for 2 nights, in three days you could see what would take you 4 or 5 days travelling from London and back each day. You could see Windsor, Salisbury & Stonehenge on the way from London. Next day you could see The Roman Baths at opening (before the tour groups arrive from London) then head out of Bath to see the Cotswolds and maybe even Stratford upon Avon. On the way back to London you could see more Cotswolds, Blenheim Palace, Oxford and the beautiful and relatively undiscovered Chiltern Hills.

The accommodation in Bath - and other towns and rural areas - can be significantly cheaper than London, especially at the middle to top end of the luxury scale. Or add in another night in the Cotswolds and your options multiply.

It's a great way to see England. You will avoid the confusion caused by not driving on the right side (as opposed to left) of the road, as well as eliminate the stress of navigating and finding parking. I get much more time to show you the little back ways and hidden or lesser known places that are an integral part of Britain's heritage.

Generally, we don't do more than 150 miles in a day travelling this way, sometimes much less.

Or if you want to do a round England tour, that's one of my specialities. The best cities, towns and areas to stay in - going clockwise around England are: Bath, Oxford, The Cotswolds, Chester, Lake District, York, Cambridge and then back to London. That's just the briefest of outlines of the possibilities.

What about The Peak District National Park ? Ever heard of it ? It's located between the Cotswolds and Chester. It has probably the finest private home in Britain - Chatsworth, home of the Dukes of Devonshire. Film location for "Pride & Prejudice"(1998) & "The Duchess".

There are so many other options i haven't even mentioned.

I am very happy to work with you to build an itinerary and suggest hotels at a suitable price level and for all interests, including child-friendly places to stay.

For overnight tours, I know the quaintest inns and the most luxurious hotels and all the levels in between. I'm an expert at itinerary planning and can help you save time and money in ways that you would never think of.

If you are using my services on an overnight tour i do not make any charge for itinerary planning and booking - once we have agreed outline details and you have paid a deposit.

I also offer my services as an independent itinerary planner if you want to self-drive or travel by train. I can purchase train tickets in advance, often saving you more than 50% of the cost of booking on the day of travel. I can recommend hotels and inns in several price categories and worthwhile places to eat.

I can also help you avoid unrealistic itineraries and show you how to optimise your sequencing to achieve what is on your wish-list. I will create the most time-efficient itineraries that avoid back-tracking and doubling up. I charge a time based fee for this service.

Usually, i will have a consultation with you over the telephone at an agreed mutually convenient time (no charge to you, at my expense) to get an idea of your needs, interests, likes and dislikes and the profile of your group. I have found this to be much quicker and effective than an endless ping-pong of emails. I get a much better sense of what will work for you and whether we may be wasting each other's time. You get a better sense of what i am like, what i can do for you and get some questions answered.

After an initial fee consultation, this service requires an initial deposit and agree on my time-based fee of GB £50( roughly USD $70) per hour.

Notes From Our Clients 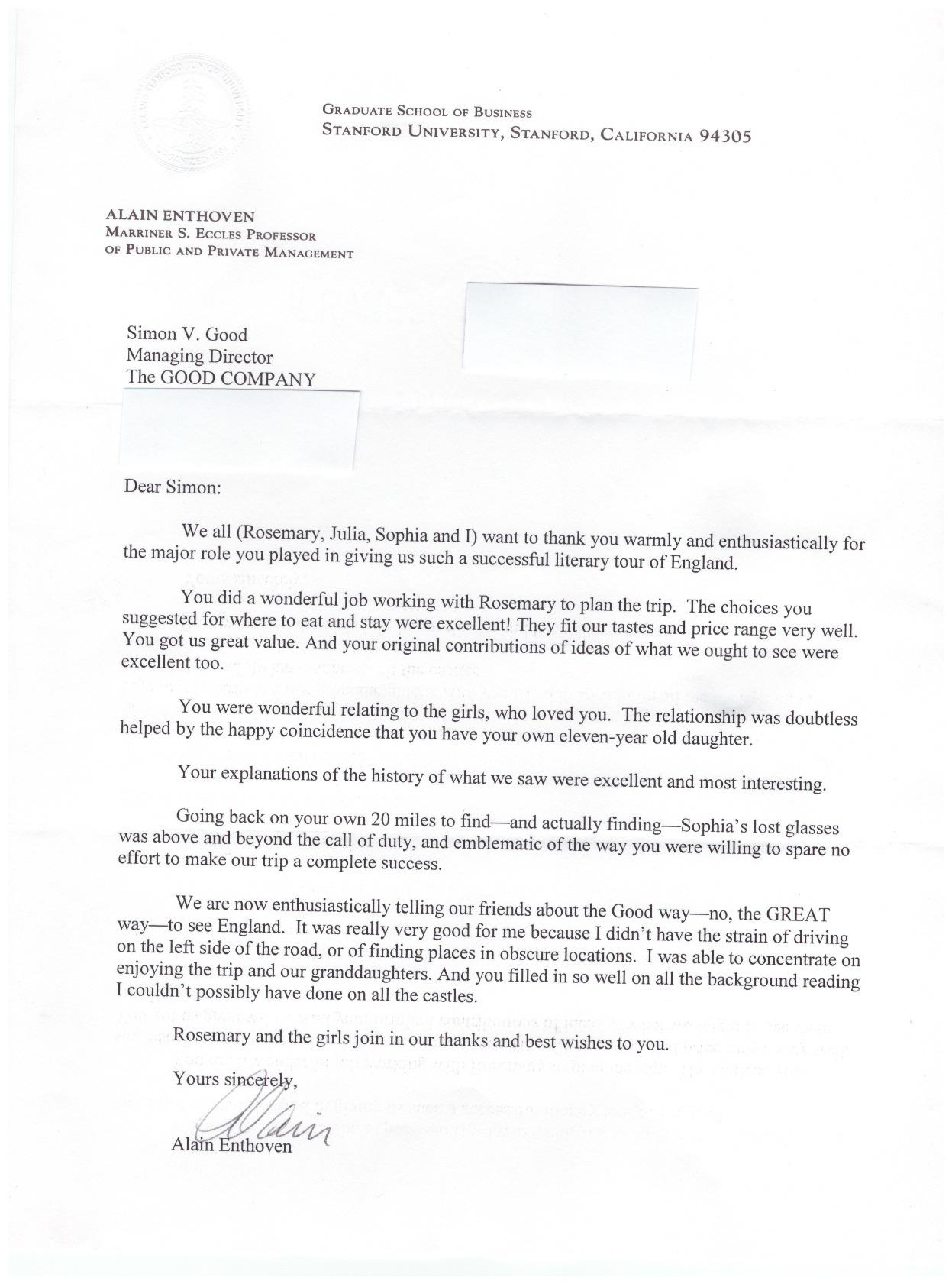 Dear Simon, We all (Rosemary, Julia, Sophie and I) want to thank you warmly and enthusiastically for the major role you played in giving us such a successful literary tour of England. You did a wonderful job working with Rosemary to plan the trip. The choices you suggested for where to eat and stay were excellent! They fit our tastes and price range very well. You got us great value. And your original contributions of ideas of what we ought to see were excellent too. You were wonderful relating to the girls, who loved you. The relationship was doubtless helped by the happy coincidence that you have your own eleven year old daughter. Your explanations of the history of what we saw were excellent and most interesting. Going back on your own 20 miles to find - and actually finding - Sophia’s lost glasses was above and beyond the call of duty, and emblematic of the way you were willing to spare no effort to make our trip a complete success. We are now enthusiastically telling our friends about the Good way - no, the GREAT way - to see England. It was really good for me because I didn’t have the strain of driving on the left side of the road, or of finding places in obscure locations. I was able to concentrate on enjoying the trip and our granddaughters. And you filled in so well on all the background reading I couldn’t possibly have done on all the castles. Rosemary and the girls join in our thanks and best wishes to you. Alain Enthoven 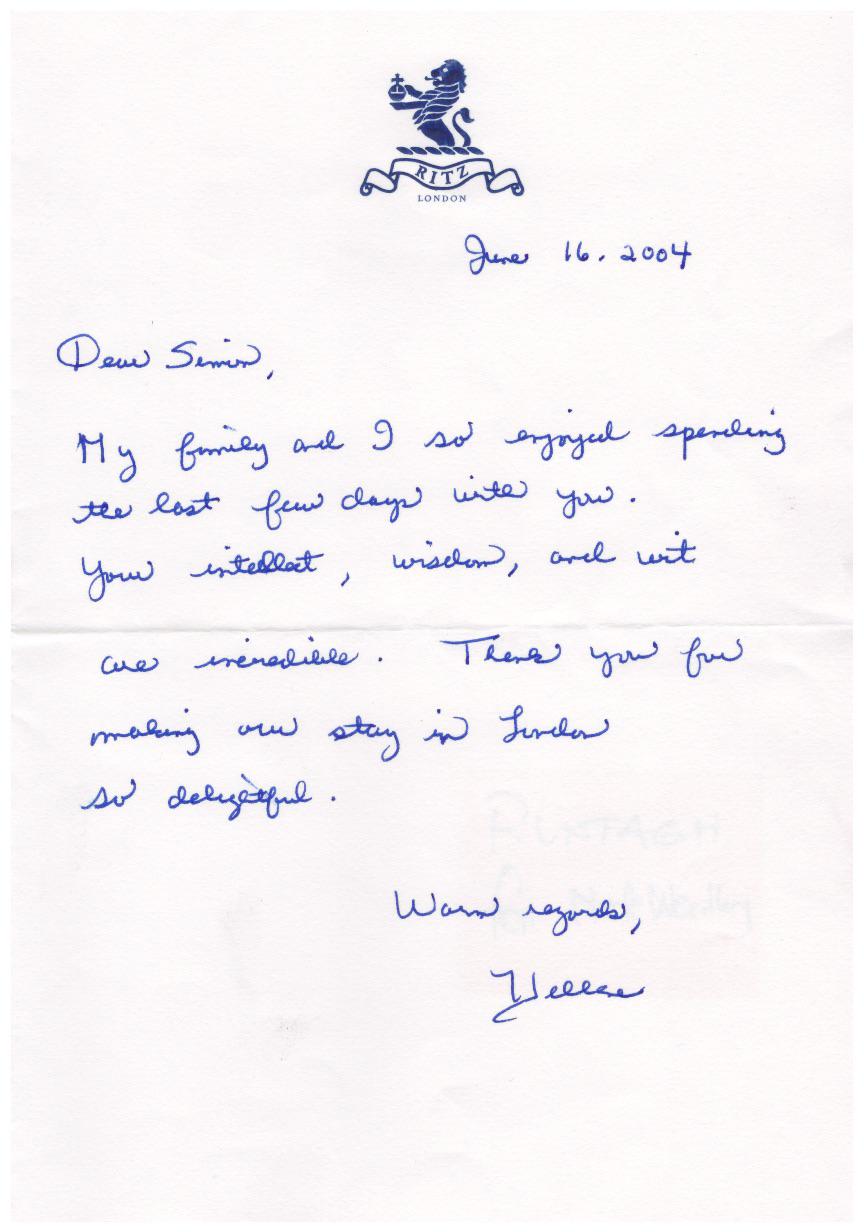 Dear Simon, My family & I so enjoyed spending the last few days with you. Your intellect, wisdom and wit are incred- ible. Thank you for making our stay in London so delightful. Warm regards, Helen Runtagh 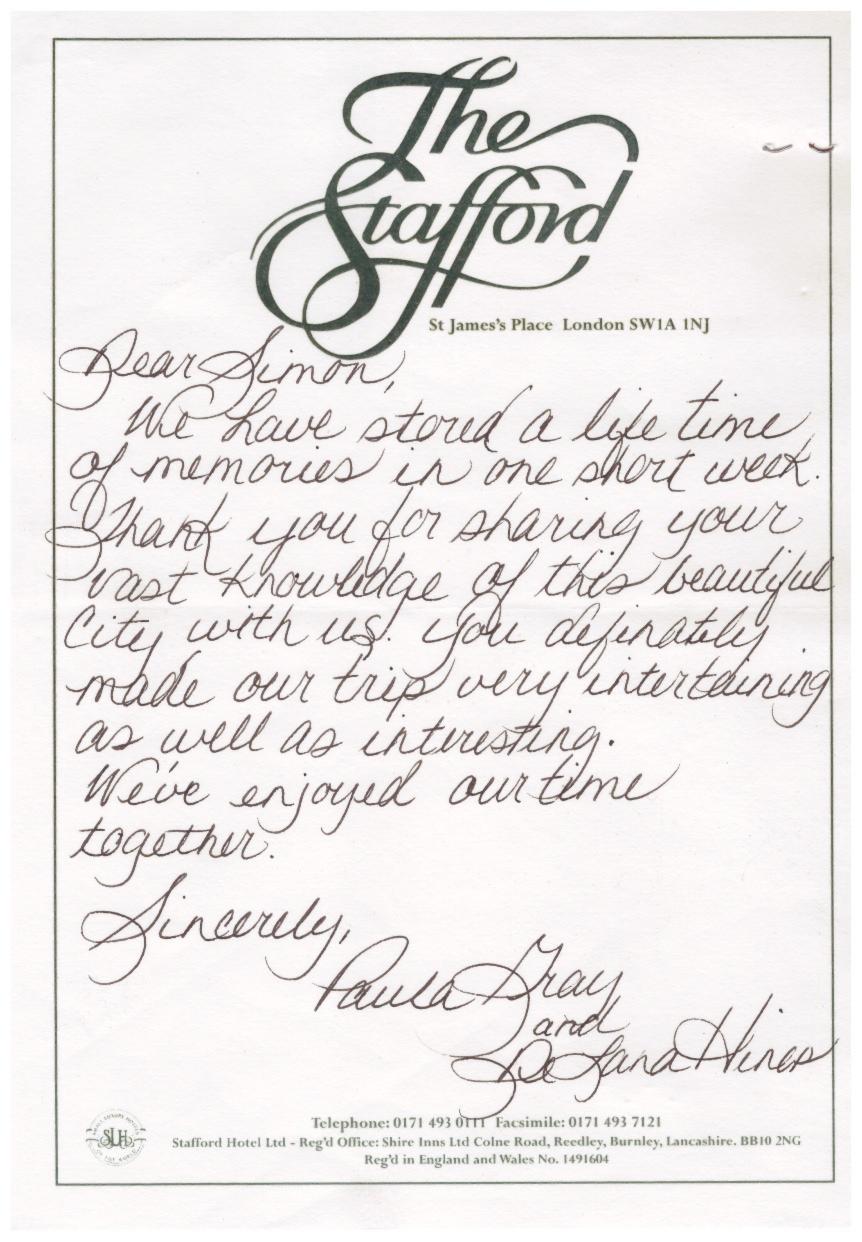 Dear Simon, We have storied a life time of memories in one short week. Thank you for sharing your vast knowledge of the beautiful city with us! You defiantly made our trip very entertaining as well as interesting. We enjoyed our time together. 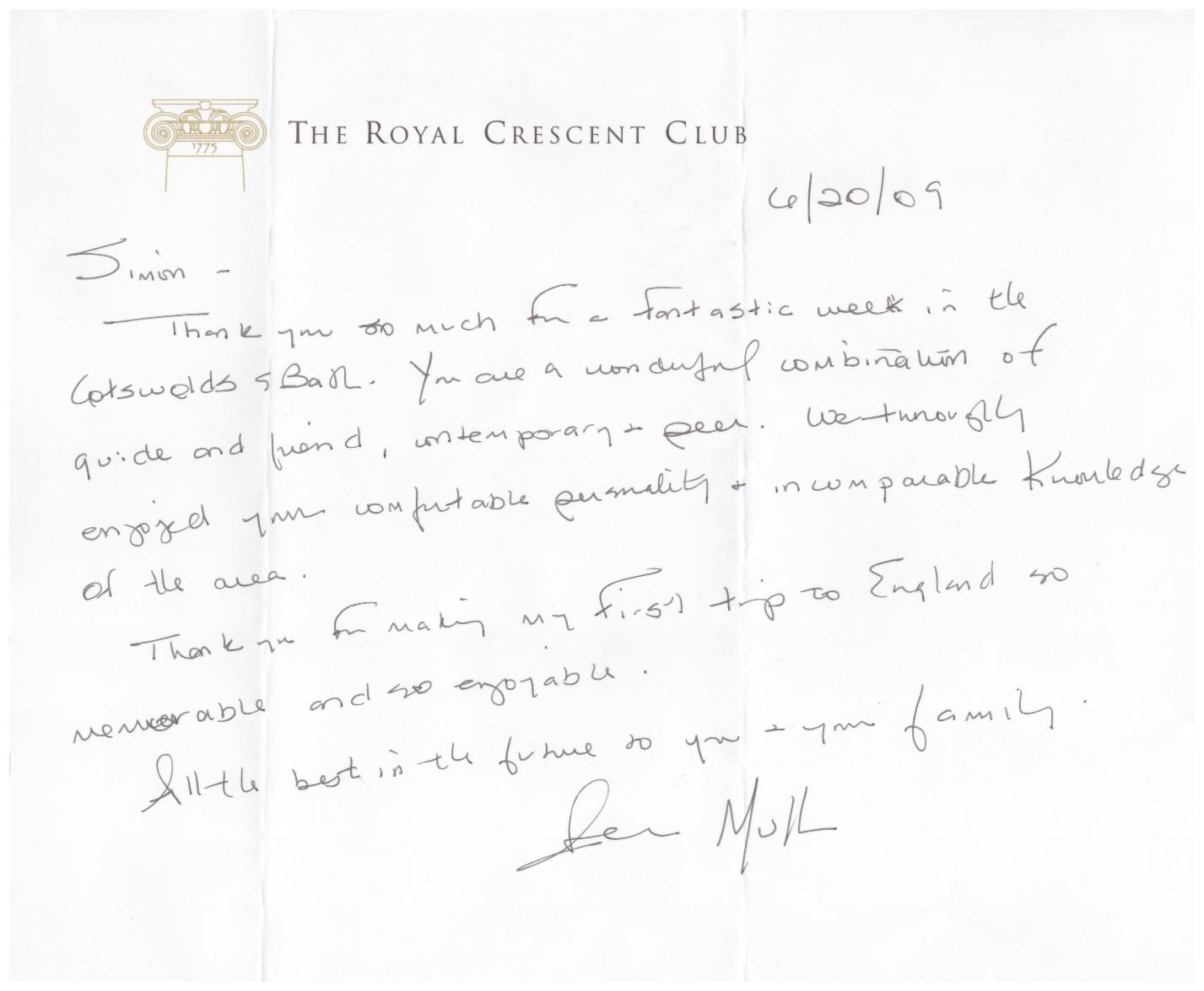 Simon, Thank you so much for a fantastic week in the Cots- wolds & Bath. You are a wonderful combination of guide and friend, contemporary and peer. We thoroughly enjoyed your comfortable personality and incomparable knowledge of the area. Thank you for making my first trip to England so memorable and so enjoyable. All the best in the future to you and your family. Jeannie Mullen 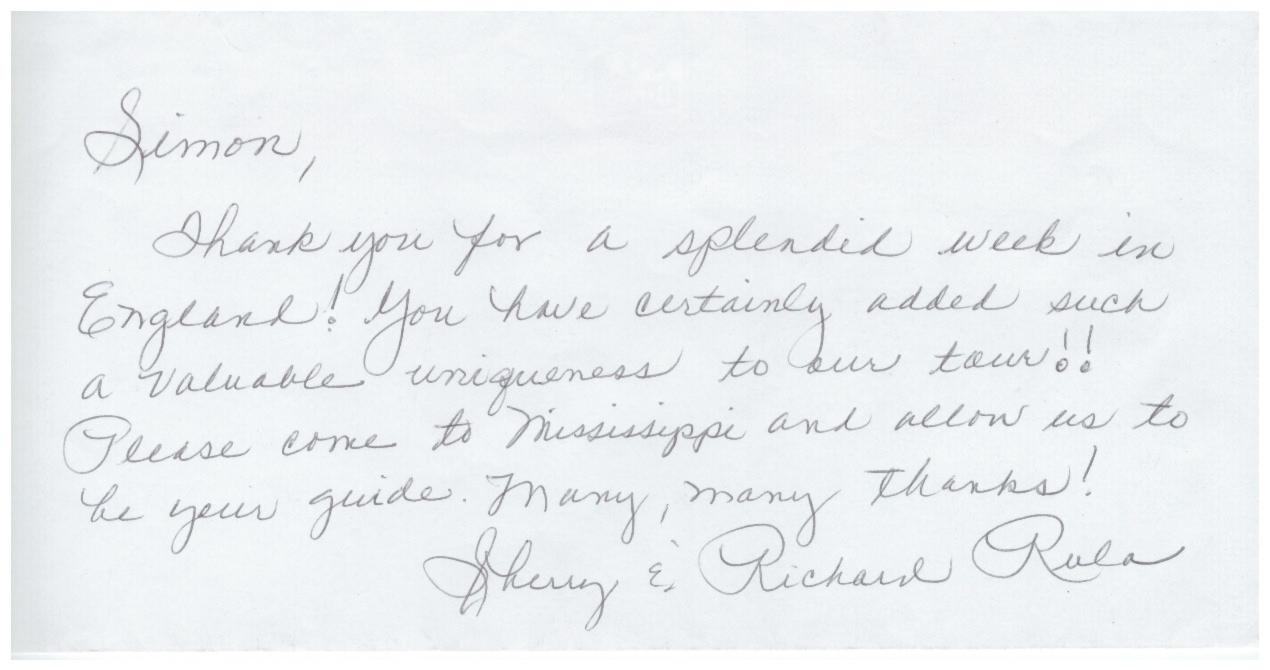 Simon, Thank you for a splendid week in England! You have certainly added such a valuable uniqueness to our tour!! Please come to Mississippi and allow us to be your guide. Many, many thanks! Sherry & Richard Rula 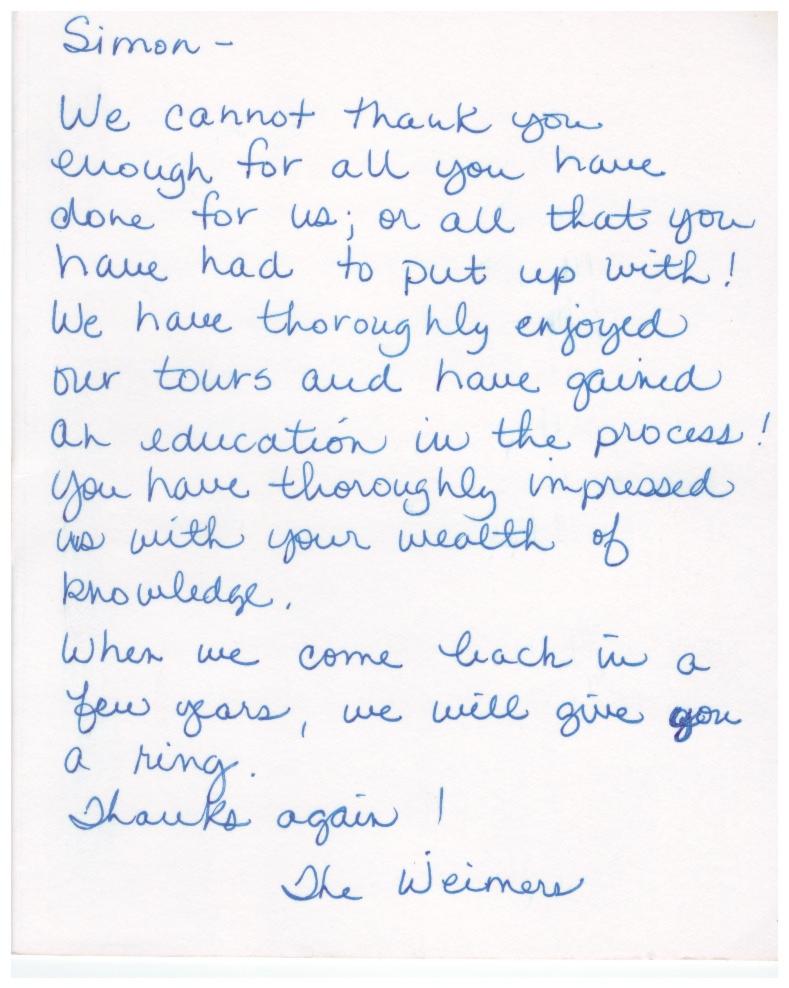 Simon - We cannot thank you enough for all you have done for us; on all that you have put up with! We have thoroughly enjoyed our tours and have gained an education in the process! You have thor- oughly impressed us with your wealth of knowledge. When we come back in a few years, we will give you a ring. Thanks again! The Weimers
We use cookies to ensure that we give you the best experience on our website. For more info, view our Privacy Policy